This post is dedicated to all the people of Japan, struggling to rebuilt after the terrible disaster caused by the tsunami. I have been amazed at their courage and grace in the face of such immense tragedy. I hope that nature will spare this country from another such disaster. 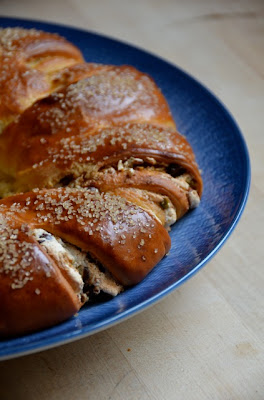 Saffron, garam masala, pistachio cake
This months I am prepared and finished a day early, unbelievable! Well...it helps that the 27th is on a Sunday, doesn't it?

Amazing considering the distraction caused by my two new babies, aren't they irresistible? 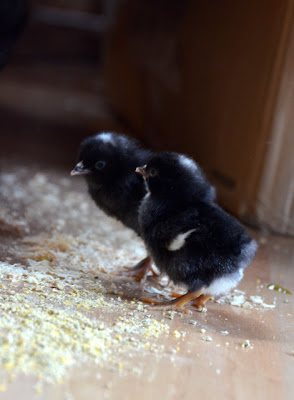 The March 2011 Daring Baker’s Challenge was hosted by Ria of Ria’s Collection and Jamie of Life’s a Feast. Ria and Jamie challenged The Daring Bakers to bake a yeasted Meringue Coffee Cake. 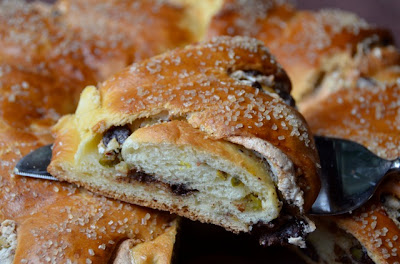 I have to confess that I was a little hesitant about this challenge. I love making bread, and I love brioche type doughs, don't get me wrong, but the use of a meringue inside the cake? I didn't think it would be a good thing. Boy was I wrong, the meringue dissolves into the dough and the filling, creating a super moist interior that is just perfect. 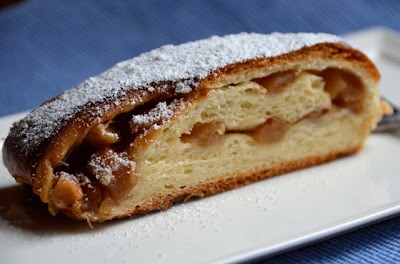 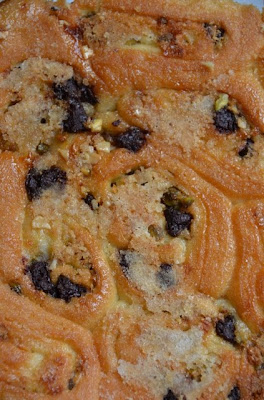 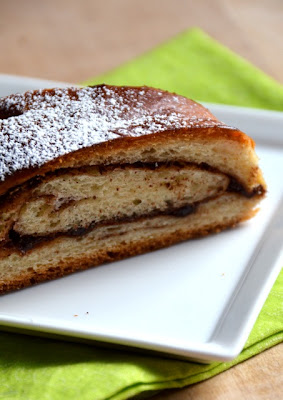 Chocolate cinnamon cake
Here are my notes...
* I made a sponge with the yeast, the milk, the water, and a little of the sugar. I left the sponge develop for 30 minutes covered with the rest of the flour, the rest of the sugar and the salt.
* I then added the eggs, adjusted the dough by adding some milk, and mixed until I got a good gluten development.
* Four cups of flour are too much for the amount of liquid. Since I normally dump all the ingredients together, I ended up adding more milk to get a softer dough. Either add less flour or be careful, and when the dough start getting together add a little bit of milk.
* I didn't add the butter until I got a good gluten development. Fat inhibits gluten development so by adding it later the dough develops better.
* The amount of saffron is not enough to give the dough a yellow tint, I ended up adding at least twice the amount.
* Because of the high fat content, the dough gets really sticky and soft. After mixing the dough I left it rise in the refrigerator for few hours, or overnight in the case of the saffron dough. The dough that rested overnight was so much easier to handle, I was able to roll it thinner and resulted in a tighter roll and in a visually better cake as well. 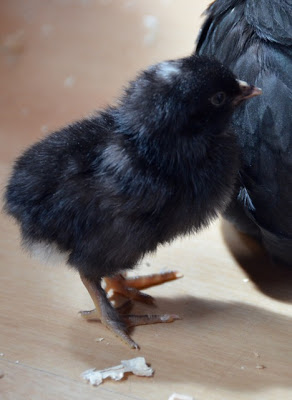 The first one to emerge, still working on a name 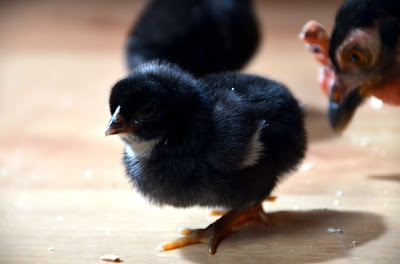 The second chick, adorable with white spot on her wings
This is off topic, unless you consider that I used the eggs from my own chickens for this cake. Last year one of our chickens became broody, meaning she wanted to be a mommy and kept sitting on the eggs. Sadly, of the four chicks that hatched only one remains, we named her Zorra because she is completely black (onedisappeared when very young, one was a rooster, and one was killed by a dog). About a month ago, Zorra, a bantam black cochin who is just seven months old, became broody too. Broody chickens sit on eggs to no end, get pecked and don't eat well, so we got 6 fertile eggs for her and last Friday two furry babies emerged. I have seen this miracle twice, and three times we had baby chickens in the house but I can't stop looking at them, they are so adorable.
Posted by Laura at 1:56 PM 15 comments:

Photo(s) of the Week 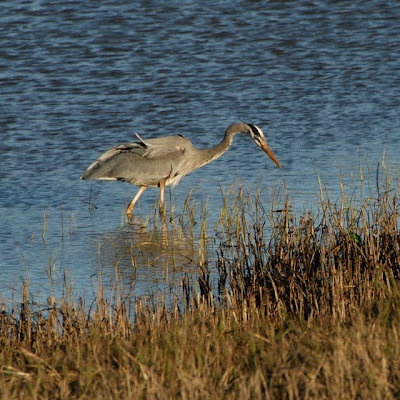 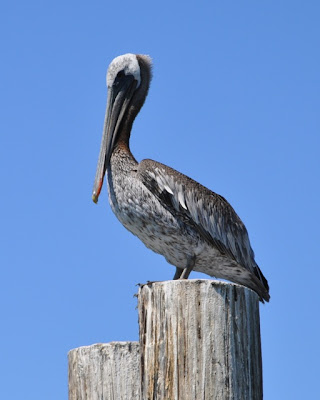 These birds are huge, they fly in formation, and when they dive you wonder how they don't dislocate both wings.
Posted by Laura at 10:35 AM 1 comment: 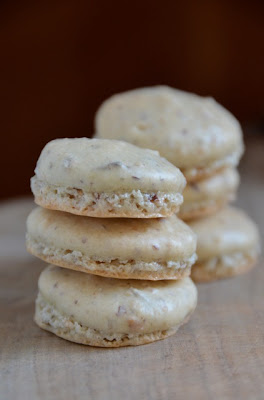 I still remember the first time I tasted these macarons, I thought I was having a transformation, an awakening, a eureka moment. I found the recipe in an amazingly beautiful and inspirational book called Wild Sweets by the Canadian couple Cindy and Dominique Duby, who later authored Wild Sweets Chocolate. Their book contains many interesting recipes of so called savory desserts, which incorporate ingredients normally used in savory dishes, not to mention the beautiful photos. With titles such as Concord Grapes Clafoutis with Sweet Savoy Cabbage and Warm Grapes, or Red Curry Squash Flan with Gnocchi and Coconut Curry Foam, you can't help but salivate. 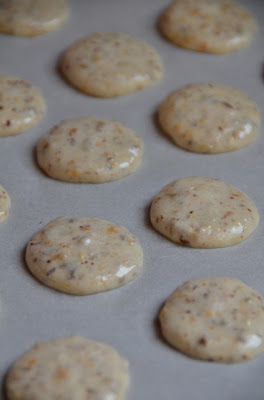 Wet and shiny macarons
The trick to these macarons is to substitute some of the almond meal with finely ground sunflower seeds and add some ginseng powder. The best part...they are gluten and dairy free, so I can eat as many as I want, which is not a problem as they are so delicious. 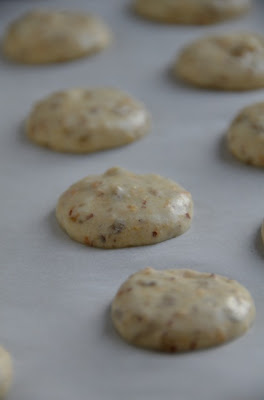 Dry and ready to be baked macarons
I don't like to sandwich them with anything since the delicate taste of ginseng really hits you at the end and a filling too sweet would most likely mask it. If you can't find ginseng powder, which is kind of expensive, you can easily omit it.
Sunflower and Ginseng Macarons
adapted from Wild Sweets
4 dozen cookies

Grind powder sugar, seeds, and almonds in a food processor. Set aside. Beat egg whites until foamy, then start adding the granulated sugar slowly until egg whites form soft peaks. Gently fold the whipped whites into the sugar mixture until throughly combined. Transfer into a piping bag fitted with a plain round tip. Pipe into 2.5 cm (1") mounds on a silicone mat or a parchment paper lined baking pan. Let the macarons dry at room temperature for at least 30 minutes to an hour before baking (the book doesn't include this step and it is a mistake as they need the top to dry for the typical macarons foot to form). Bake at 180C (350F) until light golden, 8 to 10 minutes. Store in an air tight container.
Posted by Laura at 7:46 PM 3 comments:

Email ThisBlogThis!Share to TwitterShare to FacebookShare to Pinterest
Labels: Macarons

Picture of the Week 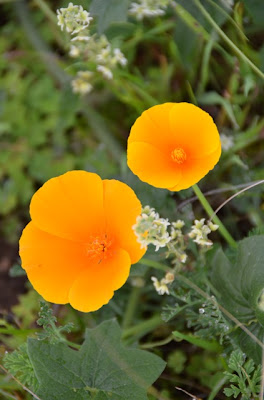 Since I don't always have time to write a whole post on food, but I constantly take pictures, I thought it would be nice to share with you the beauty that I can find around town.

While hiking around Hill 88, in the Marin Headlands, I found dozen of plants in bloom. I loved the juxtaposition of the flashy beauty of the golden poppy flower with the insignificance of the wild cucumber flower.
Posted by Laura at 2:27 PM 2 comments: 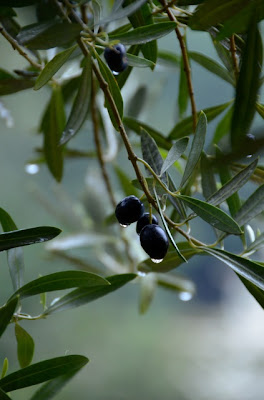 I am now the owner of a super duper new digital camera, and to show you the quality I am posting these two pictures of the olives in my garden. I can't wait to start cooking again, and take pictures with the new camera, it has been too long.... 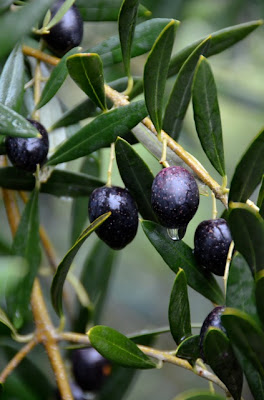 By the way, these olives are amazingly tasty. I brined and dry cured them, delicious! There are still tons on the trees and hopefully I will have time next weekend to pick more.
Posted by Laura at 8:48 PM 5 comments: