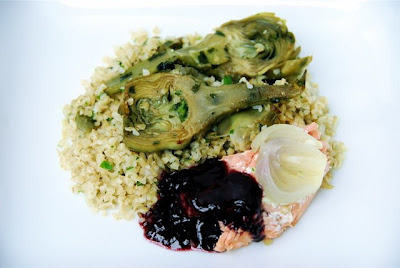 I love artichokes! When I saw that they were in the list of ingredients for this month's Paper Chef I got really eager to start cooking. In Venice, just about now, you can find the most tender and flavorful baby artichokes at any market stand. Most artichokes found throughout Venice are grown in the island of Sant'Erasmo, where most of the produce comes from since the time of the Dogi. Sant'Erasmo is one the biggest islands in the Venetian lagoon, besides Venice proper, and is relatively unknown to tourism. The best artichokes are called castraure in the Venetian dialect, meaning little castrated things, and are the flowers that sprout on the side, once the main flower is cut off. Castraure are deep purple and so tender that they can be eaten raw, thinly sliced with olive oil and lemon juice. Fried artichokes are also one of my favorite ways of eating artichokes, I can taste them just thinking about it. In Venice you can also find big artichoke hearts, called fondi di carciofo, and best cooked with garlic, olive oil, and a sprinkle of parsley. Nearby Piazza Santa Margherita, where I used to live, there is a boat referred to as La Barca, a burcio precisely, filled to the rim with vegetables of all sorts (click on burcio to see a photo of the actual boat). I can picture in my head one of the brothers who own the business, perched on a wooden case in a nearby boat, busy removing the leaves of the artichokes and tossing fondi in a huge plastic bucket full of lemony water. The memories..... 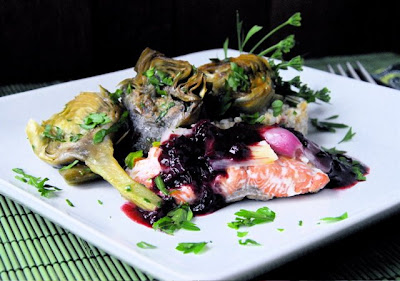 This month's judge for PC is Adrienne at Hungry Bruno. The three randomly picked ingredients were blackberries, artichokes, and bulgar, and Adrienne threw in salmon as the fourth ingredient. I knew immediately what to do with the bulgar and the artichokes, but only this morning I figure out how to incorporate the other two ingredients in the dish. I found some blackberries that weren't too ripe and pureed them, but when I tasted the puree I had no idea how to incorporate it into the dish. Luckily I run into a friend of mine who is a chef and he suggested adding some balsamic to it to bring out the acidity. I still had no clue on how to make the puree into a sauce though. Then I visited Ilva's site and inspiration struck when she mentioned blackberries in a vinaigrette. I decided to cook some shallots, add some red wine, reduce the sauce down with a piece of cinnamon bark, add some butter, and go from it. When the wine was nicely reduced I added few tablespoons of blackberry puree until I could taste them, but because it was way too acidic I added some balsamic vinegar and a pinch of sugar to add sweetness. It worked! Now that I had a great tasting sauce to use on the salmon I decided to poach the fish to give it a more delicate taste that would not interfere with the stronger sauce. I have to say that I had no hope that blackberries would work with salmon, but with few other ingredients an idea was born. Thank you Ilva for the inspiration. 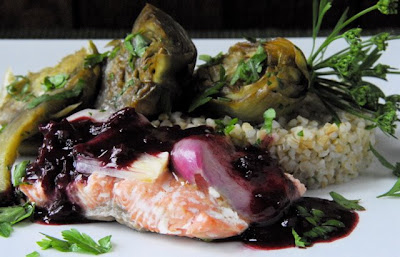 All the recipe amounts are approximated since I didn't measure anything except the bulgar.

Bulgar salad
Cook the bulgar wheat in 2 parts of boiling water until soft (1 cup to 2 cups of water). Add some EVOO, salt, parsley, and 1 minced shallot.

Wash the artichokes, peel the stem, remove the hard leaves, and cut in half. Sautee the garlic in EVOO, add the artichokes, and cook covered at low heat until tender (you may need to add some water once in a while). Add salt to taste, and sprinkle with fresh parsley.

Poached Salmon
Cover the salmon with sliced shallots and poach in water and two tablespoon of EVOO. Salt to taste.

Blackberry sauce
Mince a medium shallot and sautee in EVOO until translucent. Add a glass of red wine, a small piece of cinnamon bark, and reduce the sauce until thick. Add a tablespoon of butter, and 1/2 cup of blackberry puree, warm the sauce through, then add 2 teaspoons of balsamic vinegar and a pinch of sugar. Salt to taste. All the ingredients are approximated in amounts, so add less of everything and adjust according to your taste.

wow, delicious and healthy! Doesn't get much better than that!

Very good presentation! I love the salmon and the color mix. Thank you for the ideas! They are healthy and tasty, I'm so sure!