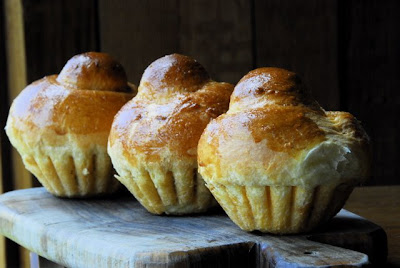 The first time I made brioche I had very little experience with yeast doughs and the brioche was to be used as a tart crust. The brioche crust just didn't do it for me, I prefer pate sucree in my tarts, so I ended up forgetting about brioche for a while. This changed when I had to come up with some breakfast pastries in the second restaurant I worked at. Sticky buns and brioche a tete were given a second change and my customers loved them!

Since then I have made brioche numerous times at work and at home, and it never fails to put a smile on my face. Not only the dough is super shiny and a pleasure to touch (may I dare to call it sexy?), but the taste of a freshly baked brioche never fails to put me in a good mood. Food has that power on me, I don't need any other stimulants, give me something delicious to eat and my neurons are bathed in serotonin.
If you have been following some of my posts, you must know about this challenge started by Nicole at pinch my salt. We are baking from Peter Reinhart's book The Bread Baker's Apprentice, cover to cover.

The fourth recipe in Peter Reinhart's book is brioche. As usual, Peter gives a nice introductory overview on brioche (who knew that Queen Marie Antoinette probably uttered "let's them eat brioche" and not "bread" before being be-headed.), then he writes three versions of this wonderful recipe: a Rich man, a Middle-class, and a Poor man version, so called depending on the amount of butter and eggs in the recipe. Since I had tried another of his recipes for a yeast dough with the rich man equivalent of butter and found it too buttery, I decided to go with the middle class version, which is very buttery as it is.
I was a little puzzled when I read that in the instructions the butter is added almost immediately. Normally the dough is mixed for few minutes to allow some gluten development before adding the butter, which coats the flour in fat and may hinder the gluten development if added too soon. Because I am stubborn, I decided to do it the traditional way and mixed the dough until it looked even, and it had some structure. I actually had to add some milk as the dough was too stiff (you want the dough to stick to the mixer bowl somewhat and it has to feel soft, somewhat sticky). Butter was then added slowly and the resulting dough was text-perfect for brioche. I left it in the fridge overnight and then made 8 mini brioche a tete, and a cinnamon bread monkey-bread style, just because I love playing with food and my family is addicted to cinnamon bread. 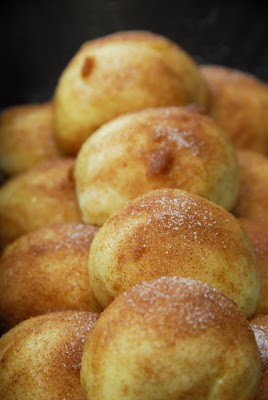 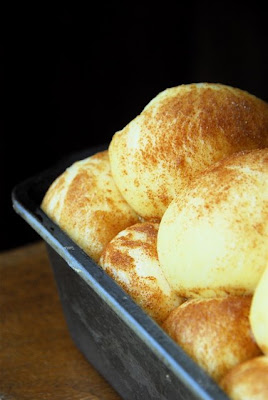 After proofing
I keep forgetting how much brioche rises and even more about the amazing oven spring. When the baked brioche comes out of the oven I get this it is alive! type of thought. 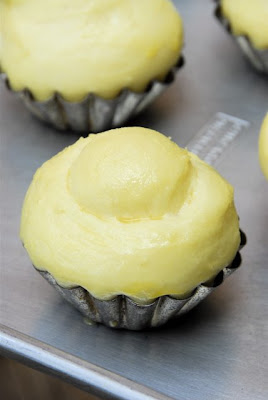 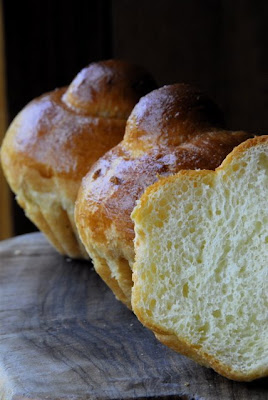 Wonderful crumb
I was really happy with the wonderful results, a nice recipe indeed. I got a "this is the best brioche you ever made" comment, so here, go buy the book if you haven't already.
Happy Baking!
Posted by Laura at 10:28 AM

Your brioches seem the "brioche with the tuppo", they are sweet Sicilians that eat at breakfast accompanied by a beautiful granulated. Excellent the recipe, the presentation day-dream, very beautiful photo!

Brioche col gelato! Memories of my first visit to Sicily. Beautiful brioches. I have the book in my wishing list.

Your brioche looks excellent! The cinnamon bread must have been delicious. Great to read about making brioche. I haven't tried a traditional brioche recipe yet.

Your brioches look amazing, and compliments are always the icing on the cake (or "the glaze on the brioche", as the case may be this time round :D).

Your brioche looks perfect! I'm a bit behind with the BBA stuff--I may have move to the slow, slow, slow track.

Thanks for your comments on my blog--yes, due to the lousy weather here in Oregon, we are behind with the flowers compared to you.

Let me know how the Farmers Market is working out for you. Our small town started one yesterday and I found out I can be part of it next month. :)

P.S. I forgot to answer your question about rhubarb--it hasn't come back from last year. I'm not sure if we will have it this year. :(

Lisa, Y, and Jill, thanks! It was very fun and delicious to make.

Gorgeous! I could almost taste the cinnamon bread. Mmmm! I wonder if you could do a tutorial for all of us on shaping brioche? I followed Peter's directions exactly, but as it was my first time trying, they are not beautiful like yours. I am sure you have learned some extra hints along the way - do share!

Oooohh, so beautiful and tempting! Those brioches look really good!

They look so good!!! Love that cinnamon monkey bread (I can totally understand your family when it comes to cinnamon!)

Janice, I am working on a bread shaping post.

Lien, nice to "see" you back, I hope your computer is fixed.

Thank you all who came over, baking is so much fun and it is even better if I can inspire somebody to make brioche.

I am so glad to have found your site as well! I haven't tried baking brioche (I'm not well versed in the richer doughs), but am eager to do so now!

Looking forward to keeping up with your blog!

This is gorgeous! Mine rose a lot too - I was surprised but I suppose that is a good thing, right?

What gorgeous brioche, Laura! I learned brioche your way -- adding the butter last. It certainly worked for you!

Claire, you are an accomplished baker as it is, the same principles of bread making apply to rich doughs, with just minor adjustments. I hope you try brioche dough, it is full of butter, but once in while it is a pleasure to make and eat.

Maris, yes, brioche rises tons before and during baking. It has to do with the eggs I am sure. I am glad you are part of this great group.

Thank you Susan, in you I have found another mentor to learn from, very happy about your and your blog existence. Keep on inspiring us!