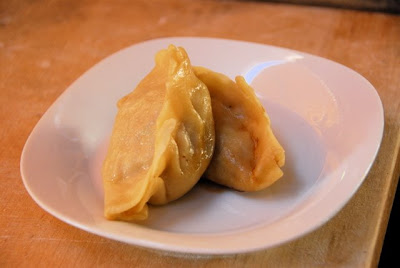 This month's challenge was something I was looking forward to trying. I tend to cook Italian food all the time, updating the recipes using some unusual ingredients, especially in desserts, but mostly it is Italian I go for, it is what I grew up with and it comes natural. Until today I hadn't tried anything Asian since I thought I wouldn't know what to do. I took on this challenge with trepidation, but fear not, my readers, this was a great dish of easy execution. And the taste was perfect, it felt like I was eating at a Chinese restaurant.

Jen of use real butter chose the recipe this month, to see the complete recipe click here. To see a complete instructional post with pictures click here. We were asked to make the dough in the traditional way, as opposed to using pre-made wrappers, choose a filling (pork, shrimp, or vegetarian), and a cooking method (steamed, pan fried, or fried).

I decided to stick to the recipe instead of being daring since I was already a day late making them, so there was no time to lose in experiments. I have so many things on my plate right now it is insane! To my surprise it took no more than 15 minutes to put the filling together as it only requires chopping. 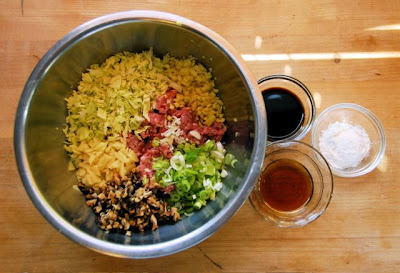 The dough is also easy to make and roll. Surprisingly it is made only of warm water and flour, a stiff dough that gets softer after some resting, and roll easily with the use of some flour. I only made one batch and cut 18-0.7 oz. portions. Initially I rolled them too thin, and as you can judge from the jelly fish below, it was hard to shape them. After reviewing Jen's tutorial for a second time, I quickly got a hang on the pleating, and it was smooth sailing after that. The more time consuming part is the rolling, but that again it was not too difficult and the dough cooperated well. 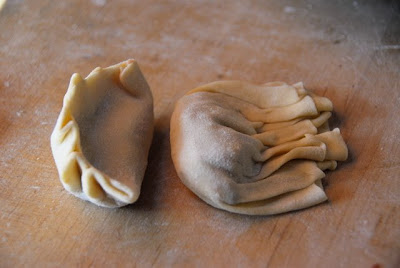 I pan fried the little purses, and used straight soy sauce since there was not time for anything else, but I will try the make one of the sauces Jen suggested in her challenge I am looking forward to making these dumplings again, with pork or fish, or something Italian, and steaming them. I would like to also try the gluten free version Jen suggested in her post, they look so beautiful. A very long time ago, I went to a Chinese New Year party and we assembled potstickers made with a sweet pea shoot filling that was so light and tasty, I would try it but I think it is too late in the season now. There is always a next year.
Thanks to the Daring Bakers' founders, Lis and Ivonne, and to Jen for choosing this delicious recipe.

Check other Daring Cooks' creations below:

You made it!
And you made it great!
I found this challenge so funny, too!

Legal Alien, yes it was easier than I had thought!

Audax, thanks for stopping by, you are the true daring cook, your creations are always stunningly diverse.

I heart potstickers... actually any dumpling will do for me. I used to work in this restaurant where we had lobster potstickers on the menu as an appetizer. They sold really well... a little too well if you ask me. At the end of almost every day there would be 5 or 6 of us gathered around a work bench in the back, folding hundreds and hundreds of the damn things.
Anyhow, yours look perfect :)

Well done!!!!!!!!!!! They look greeat :) I like your jellyfish (hahha!) we had some pretty funny looking mishaps as well.

Thanks for sharing the jelly fish story. I will remember it when I try making the skin thinner next time: I should not overdo. I also tend to cook Italian or Italian-inspired and so I welcomed this challenged as it pushed me out of my box.

I love the dumpling that looks like a jellyfish, and truth be told, I think that's a great shape for a dumpling...it looks cool! Gorgeous job all around, they look awesome. Some of mine look like cellulite!

Thanks for letting us know that they are pretty easy to make. I always thought they looked time consuming to make. :) Love the pictures of both dumplings (the "jellyfish").

These look great! Never heard of potstickers before this challenge, sounds runny somehow. I have a book on dumplings... but never made anything out of it. I should, I really should!