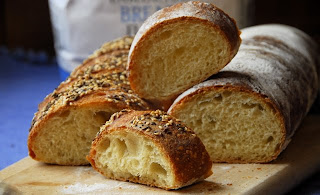 This month's Bread Baking Babes' challenge is brought by Sara at I like to cook. She chose a Pane Francese recipe from the King Arthur Bakers' Banter site, and wrote a very detailed post about it (go check her site). I wanted to participate as a Bread Baking Buddy so I rolled up my sleeves and started the process Sunday morning.
The recipe calls for a chef, a small amount of old dough as the source of yeast. Since I didn't have any old dough I defrosted some pizza dough I had made two days before and used that as the "chef". The dough has some rye flour and olive oil but it will all get diluted in the final dough. I only found King Arthur Bread Flour at the store, not the special one Sara mentioned, not sure it makes a difference. The first dough took about 5 hours to double and it looked nice and soft. The second dough didn't quite doubled in 4 hours, but since I was going to bed I fed it for the third time, or final dough, and let it rise overnight at room temperature. I decided to use my mixer to knead the final dough since it was getting impossible not to add more flour by kneading by hand. It was quite cold in my house, so I was curious to see the dough after the overnight raising. This morning the dough had doubled nicely so I shaped it in two long loaves, and let them proof in the oven with the light on. It took the loaves about 2 1/2 hours to rise to almost double, despite the oven light. I sprayed one loaf with water and sprinkled some mixed seeds on it, 10 minutes later I slashed it in 4 places (I know, I know, the recipe calls for not slashing, but I wouldn't be me is I didn't beg to differ).
I baked the loaves at 45oF creating steam on a baking pan underneath. After 15 minutes the loaves had sprung and started to color so I rotated the pan and lowered the oven temperature to 400F. Fifteen minutes later I notice that the loaves were still really heavy but started to get too dark so I turned them up-side down, lowered the temperature to 350F. Ten minutes later they felt hollow and much lighter so I took them out and cooled on a rack. The bread looked fantastic as I came out of the oven, nicely browned, almost reddish in tint, and I had to resist the urge to eat a piece and instead let it cool 10 minutes. 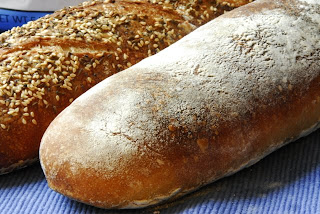 After taking some pictures I finally tasted both versions and I was really happy with the results. The bread tasted very faintly sour, had a superb crunchy crust, and passed the bread and jam test. 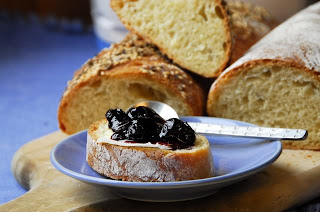 In all the recipe was easy to follow, and because of the slow rising it can be done without rushing, and the flavor of the bread was worth the effort. After eating half of the regular loaf I realized that it had some major bubbles under the top crust, while the one I slashed didn't. I would think that the slashing allows the dough to evenly expand during the final rise in the oven so the gas bubbles are more evenly distributed. Thanks Bread Baking Babes for inspiring us with your monthly challenge!
Creating the Levain
chef (1/4 cup leftover dough, or 1/4 cup sourdough starter, unfed)
1/4 cup warm, chlorine-free water
1/2 cup King Arthur Unbleached Special Bread Flour

Let the chef soften in the warm water, then whisk out any lumps. Mix in the flour until you've formed a stiff dough. Turn the dough out onto a floured surface, and knead it for 5 to 8 minutes. The chef (now called a levain) should be moist but firm. Place the levain in a bowl, cover it with a damp cloth, and let it rise in a warm place till doubled. This will take 5 to 6 hours.

"Refresh" the levain by placing it in a medium-sized bowl, chopping it into small pieces, and adding the water and 1/2 cup of the flour, stirring till smooth. Add the remaining flour gradually to create a stiff dough. Knead the dough for several minutes, then return it to the bowl, cover it with a damp cloth, and let it rise for 3 to 5 hours, till it doubles in size. Punch down the risen levain, and reserve 1/4 cup as your next chef. (Let the piece ferment at room temperature for 3 hours, then wrap it in plastic and store it in the fridge. It'll develop a hard crust; that's OK.)

Chop the levain into small pieces, and mix them with the water, stirring till they begin to dissolve. Add the salt, then 1 1/2 cups of the flour. Turn the dough onto a lightly floured or lightly greased work surface, and knead until the dough is smooth and satiny, adding only enough additional flour to keep the dough from sticking unbearably. Return the dough to the bowl, cover it with a damp cloth, and let it rise in a warm place for 8 to 10 hours.

Shaping: Cut the dough into 2 pieces, and shape each piece into a round or oval. Transfer the loaves to a lightly greased or parchment-lined baking sheet, or to a floured banneton; cover with a heavily floured cloth, and allow them to rise for 2 to 3 hours, or until they're almost doubled in bulk.

Don't slash or glaze the loaves. Bake the bread in a preheated 450°F oven for 35 to 40 minutes, or until they're a deep, golden brown. Yield: 2 loaves.

Yippie! Thank you Sara for the batch! 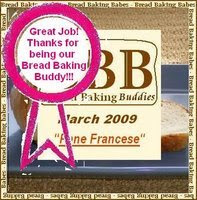 Email ThisBlogThis!Share to TwitterShare to FacebookShare to Pinterest
Labels: BBB

I have not tried baking bread this way! I ought to try it!

Hi Laura - You chose just the right flour - King Arthur "Special" and King Arthur bread flour are one and the same. Special is the 50-lb. bag version sold to bakeries, that's all. Glad you had fun with this! PJ Hamel, King Arthur Flour baker/blogger

Laura, wow you are speedy! So glad you liked the bread. Thanks so much for joining us this month.

Beautiful loaves Laura, lovely that you baked this too!! You're all fortunate to have access to KA-flour. I think it's high time they opened up a store here in Europe, because it's hard to get your hands on good breadflour here.
I loved baking with a piece of old dough, so much easier in keeping a good starter alive...
Thanks for baking with us!


We bumped into your blog and we really liked it - great recipes YUM!!! YUM!!!.
We would like to add it to the Petitchef.com.

We would be delighted if you could add your blog to Petitchef so that our users can, as us,
enjoy your recipes.

Petitchef is a french based Cooking recipes Portal. Several hundred Blogs are already members
and benefit from their exposure on Petitchef.com.

To add your site to the Petitchef family you can use http://en.petitchef.com/?obj=front&action=site_ajout_form or just go to Petitchef.com and click on "Add your site"

Laura your loaves look beautiful!
My husband is still asking for this bread ;) so today I'm working to re-birth my chef and do it again. In all my baking of this one I didn't get any bubbles under the top crust and I didn't try slashing (which I plan to this time). It's really fascinating how different the same recipe even with the same flour but different baker and kitchen can give us different experiences and out comes.
Thanks many for baking with us again. Delighted you enjoyed.

Love how the crust turned out on yours. Reddish brown breads are always delicious.