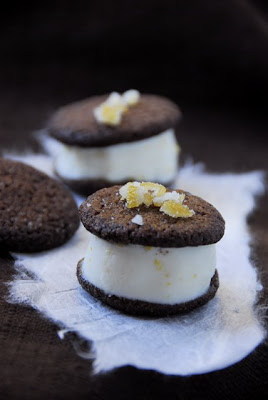 Gelato is ever present in Italy, everywhere you go there is a gelateria where you can find the most amazing flavors of ice cream (malaga, bacio and melone are some of my favorites). Just two blocks from my house there was a wonderful ice cream shop, Gelateria Causin, owned by a nice couple whose son worked there, and was/is the cousin of one of my classmates, whom I had a crush on. They weren't too bold with experimenting, their flavors were classic, but the ice cream was delicious. After many years in business the couple retired and the son sold the business, which has never been the same after they left. I wish I had known back then that I was going to make ice cream as a living, I would have asked them to apprentice at the shop, to learn their craft and maybe get a chance at romance with my former classmate. 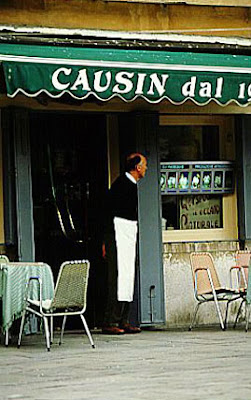 Mr. Causin, like I remembered him, waiting for his costumers*
I have learned how to make a simple ice cream base with eggs, milk, cream and sugar. I change the flavors depending on the season, cardamom, ginger, vanilla, lemon thyme, lemon verbena, you name it, but this time I turned to two of my favorite Pastry Chefs, cookbook author extraordinaire, Emily Luchetti and David Lebovitz. While David left the Bay Area some time ago (did it do it for the French macaroons?), Emily still lives in the Bay Area, and works as the Executive Pastry Chef at Farallon Restaurant. Years ago I casually bought David's first book Room for Dessert not quite knowing who he was, but it was love at first sight when I read that he doesn't like chocolate and raspberries together, and that he is crazy for cardamom. I met Emily Luchetti when I bought her book Passion for Dessert, and had it signed at a Bakers' Dozen function. She was part of a panel of authors presenting their just released books and she answered a question that made me realize how down to earth she was despite her success. Emily is someone I would love to work with one day (not that I haven't tried, twice as a matter of fact). Her books have been the source of many recipes, her taste is impeccable and I love reading the little stories she writes on how every recipes came to being. David and Emily came out with an ice cream book almost at the same time but they are very different, hers more feminine and light, his bolder. I decided to join the two authors in an ice cream sandwich so I used Emily's recipe for ginger snaps and David's for the ice cream. I consider ice cream sandwiches something every grown up should have once in a while, to feel like a kid again. 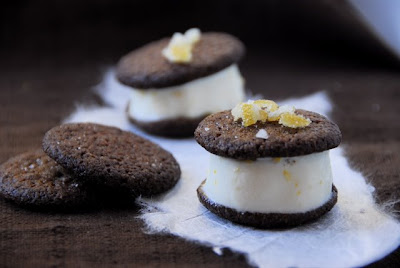 Ginger Snaps
adapted from A Passion for Ice Cream

In the bowl of an electric mixer fitted with the paddle attachment, beat the butter, 1/4 cup granulated sugar, and the brown sugar together until smooth. Stir in the egg, mix, then stir in the molasses and scrape the sides and the bottom of the bowl well. Stir in the rest of the dry, pre-sifted ingredient in two additions. Refrigerate the dough until firm, about 3 hours. Divide the dough in half, and roll in two 9-inch-long-logs and refrigerate or freeze until solid (I actually scooped the dough with an ice cream scooper). Cut the logs into 1/2" slices (there should be 24 cookies), roll them in the remaining 1/4 cup granulated sugar, arrange them on a baking pan (they expand quite a lot), and bake in a pre-heated 350F oven. Bake until set and still puffy, they will sink as they cool.

Process the zest with the sugar in a food processor until fine, and the sugar is nicely colored and the lemon oil has been released. Add the juice and mix until the sugar is dissolved. Mix in the half-and-half and the salt until smooth. Chill for an hour, then freeze the mixture according to your ice cream maker's instructions.
*Photo courtesy of unknown photographer, I can't find the site anymore. If I do I will give proper credit.
Posted by Laura at 7:50 AM

Very nice combination! When mentioning gelaterie, I get nostalgic, gelato being such an important part of growing up in Italy.

reading this post I'm realizing how lucky I am be italian :).
I've made ice cream following david's suggestions and it was a vanilla ice cream, divine and without icecreamer!
after this experience I tried with an ice creamer bt it wasn't the same.
luckily here I can satisfy myself just walking to the gelateria and as you I prefer classics cioccolato crema and...malaga ;)

Lemon ice cream sound very refreshing. I never made it myself, but I think I will once the weather a bit warmer.

A wonderful combo! Those ice cream sandwiches must taste great!

Ginger and lemon is a divine combination. I love these gorgeous ice-cream sandwiches!

Wish I could try these. They sound sooo good. The photos are so eye-catching too!